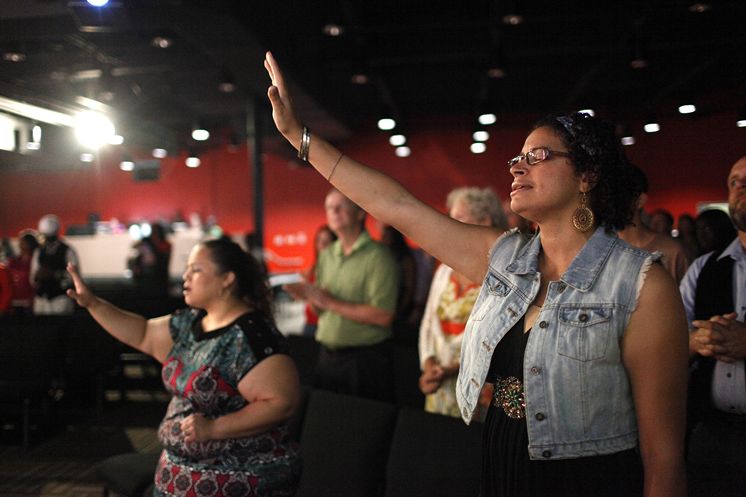 On Sunday mornings, she stands quietly by her husband, greeting church guests with a submissive smile that says thank you and God bless. She plays the piano, organizes cake walks and never forgets a prayer request.

She wears stockings and knows all 31,103 Bible verses. She only raises her voice to sing Amazing Grace.

She is the pastor's wife.

And she is a myth, say many Tampa Bay area women living with the title.

From disclosing personal imperfections to working full time outside the church and home, today's pastors' wives spurn stereotypes. They stand out as individual leaders in the community. They put aside personal insecurities to defy tradition and give women a voice.

According to the Global Pastors' Wives Network, they face pressures only others in the role can understand. They juggle multiple responsibilities. Church members expect them to attend every event, to show up at baby showers and lunches.

Their children need help with homework, a fan in the bleachers and rides to school. Their husbands look to them for support and a loving embrace. Many have a boss adding to their calendar.

No one wants to see one of the balls drop.

"It's hard and it can be extremely isolating," said Eleanor Saunders, wife of Mark Saunders, senior pastor at Bay Life Church in Brandon. "A lot of people have preconceived notions of what they want you to be. It's hard for them to see us as just like them. So you can't be in this gig and be a people pleaser."

Saunders, 43, describes herself as "hippie-ish." A mother to three teenagers and a former social worker, she is an advocate for foster children. She clothes the homeless and designs purses made from found recyclables.

A little more than a year ago, she took a job as the Missions and Outreach Coordinator at Bay Life, managing projects as far as Uganda and in the church's backyard. On property, she oversees a vegetable garden to feed hungry families, which produced 2,100 pounds of fresh produce last year.

Still, Saunders worries about how the congregation perceives her. She frets about being too loud or too earthy; a trait she notes is uncommon among Southern Baptists. When she and her husband came to Bay Life in 2004, Saunders struggled to find friends. She feared saying the wrong thing to the wrong person.

"In the beginning it was rough, I constantly felt like people were surprised or almost disappointed by who I was," she said. "I had to let it go."

Saunders' mother-in-law, a fellow pastor's wife, became her sounding board.

"I remember calling and telling her someone from the church asked when I was going to color my hair," Saunders said. "She said 'You have to ask yourself who are you in the eyes of God.' No one should have false expectations put on them."

Blessing Ude, founder of the Pastors' Wives Network, echoed the put-God-first sentiment. Ude said that members expect a specific kind of church involvement or prefer certain personality traits from the wives of pastors and that it varies depending on the culture or congregation.

Adding to the challenge: The expectations are not articulated until after the wife fails to meet them.

"It is so easy for pastors' wives to associate their identity with their position or title instead of with God," Ude said. "When this happens, they can easily fall prey into the hands of people and trying to live up to their expectations, which is like aiming for a moving hidden target with a bow and arrow, resulting in frustration and futility."

Lucy Kyllonen, wife of Crossover Church pastor Tommy Kyllonen, can relate. She didn't grow up going to church on Sundays. She has a master's degree in psychology, not divinity. When her husband transitioned from youth minister to lead pastor at Crossover in the north Tampa area in 2002, she was excited but overwhelmed.

"In the beginning, I had my own perceptions of what a pastor's wife is supposed to look like and act like," said Kyllonen, 42. "I thought 'She's perfect. What will people think of me?' It took me a while to accept myself for who I am and realize when God called my husband to this role, he called me too."

Today Kyllonen leads C.H.O.S.E.N, Crossover's women's ministry, and serves as the church administrator. A mother to two girls, ages 10 and 7, she is passionate about helping women of all ages develop their spiritual lives. She encourages them to embrace their talents and differences as gifts from God.

She still refrains from forming close friendships with church members. When Kyllonen needs help balancing life and leadership, she turns to national support networks such as For the Girls International or Leading and Loving It. Through these groups, she meets women like herself.

Today, a pastor's wife in need of a listening ear can find women like herself online. There are dozens of support communities designed to connect women in ministry. The sites offer information on retreats, conferences and other resources.

"You have to keep certain boundaries in place with members of your congregation," Kyllonen said. "That's why connecting with other pastors' wives is helpful. They really understand the ups and downs you go through."

For Charmaine Cousins, wife of Love First Christian Center pastor Jomo Cousins, the boundaries are undefined. When her husband, a former NFL player, opened Love First in Riverview in 2008, she vowed to "keep it real" with the congregation. She wanted to cook for them and cry with them.

On Mother's Day, Cousins spoke comically about wanting her son's baseball team to lose so she could stop going to games. She admits her marriage has potholes. Churchgoers know her children misbehave and get messy.

"I'm not trying to pretend I have it all together and be this perfect hat-wearing church girl," Cousins said. "I'm not perfect. None of us are."

At Relevant in Ybor City, tattooed and pierced members show up in shorts. The music is modern. The attitude is "judge not."

"A lot of our members have come to Jesus through Relevant, so Relevant is what they know," Wirth, 45, said. "They don't compare us to the traditional church."

During the week, Wirth teaches special education at Bay Life Academy in Seffner where her daughter, 17, attends school. Having a child with special needs makes it hard to put on pretense, she said. If people want to compare her family to the norm, Wirth laughs it off.

"What is normal?" she said. "Normal is a setting on a clothes dryer."

As a young pastor's wife, April Adkins, 35, considers stereotypical expectations a things of the past. In May, she and her husband, Joe, opened a campus of the Crossing Church in their hometown of Ruskin. Adkins, who works as a campaign coordinator for Prevent Blindness Florida, does not live in her spouse's shadow. She supports him and he supports her. Together, they are raising a family and building a congregation.

"A pastor's wife has to be strong and not timid," she said. "She knows God created her to be who she is. She supports her husband and connects with the people. At least in the circle I do ministry in, the stereotype isn't the stereotype anymore."

Sarah Whitman can be reached at [email protected]

Oops, you forgot something.

The words you entered did not match the given text. Please try again.

Reply JamosCog
11:13 AM on June 4, 2021
Thank you! I like it.
https://essayssolution.com/
how to write a scientific essay
do my homework
custom made essays
how to write a research papers
write a essay about yourself
online dissertation
best online essay writer
help writing thesis statement
writing an autobiography essay
writing websites
personal essay help
mathematics homework
write my essay for money
https://contest101.webs.com/apps/guestbook/

Reply JamosCog
10:26 AM on June 11, 2021
Many thanks, Ample knowledge!
https://topessayservicescloud.com/
write my essay paper
https://ouressays.com/
buy essays online for college
https://writingthesistops.com/
how can i write a good essay
https://topessayservicescloud.com/
show me how to write an essay
https://ballardgaines1.webs.com/apps/blog/show/47417674-as-well-a
s-hints-on-landscpaing-your-personal-garden

Oops! This site has expired.

If you are the site owner, please renew your premium subscription or contact support.